The theme of the Master class is the importance of practical knowledge of different jazz piano styles historically, through epochs, in order to better understand more recent styles and develop a personal expression. 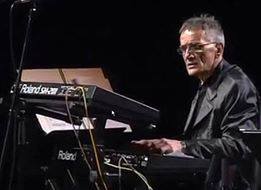 Milan (Miša) Komnenić is a studio and jazz musician from Belgrade. He worked for 12 years for the RTV Novi Sad Review Orchestra as a pianist and arranger, and was a member of the orchestra of the Terazije Theatre in Belgrade. He later joined the RTS Big Band where he stayed for over 20 years. In parallel, he worked as a teacher at the first State Jazz Department in Music School “Stanković” for 10 years. He graduated from Berklee’s Department of Arrangement and Composition (CC). As a keyboardist and arranger, Miša has worked on a number of records and CDs of pop, rock and jazz music. He spent some time as a member of the rock group Smak, doing a record and a concert with its last original line-up. As a pianist, Miša has collaborated with all leading jazz singers, such as Nada Knežević, Bisera Veletanlić, Bebi Dol, Katarina Kačunković, Suzana Petrićević, Marija Mihajlović, among others. He has also extensively composed music for theatre. Recently, he has been spending time in his studio focusing mainly on his original music and jazz standards, almost 200 of which posted on YT.