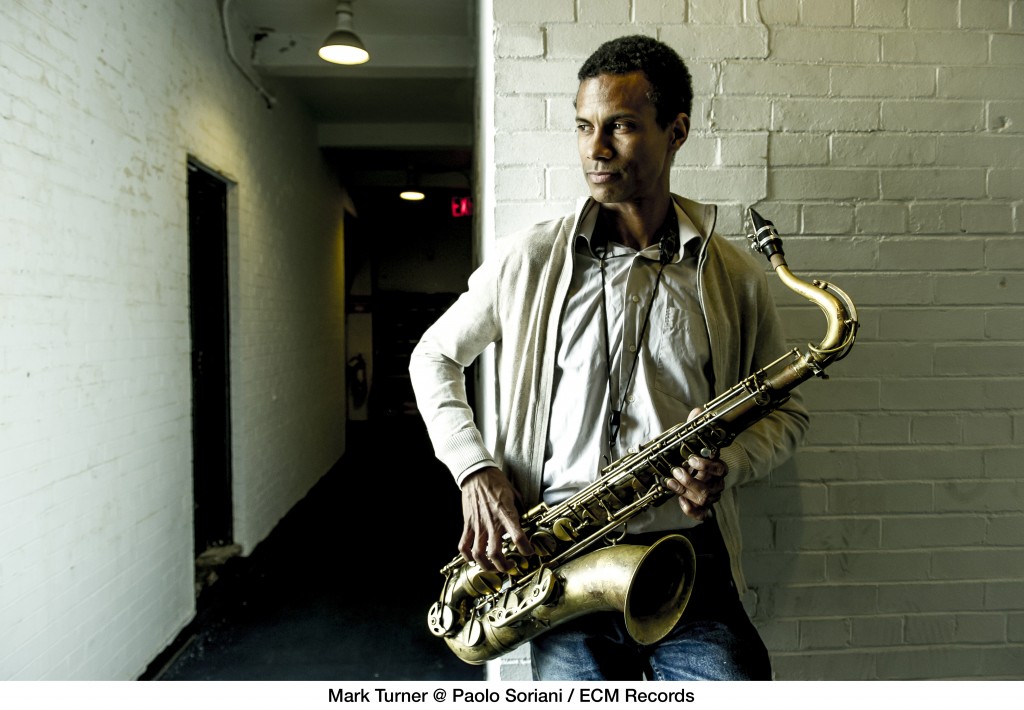 In a career that spans two decades and encompasses a broad array of musical ventures, saxophonist Mark Turner has emerged as a towering presence in the jazz community. With a distinctive, personal tone, singular improvisational skills and an innovative, challenging compositional approach, he’s earned a far-reaching reputation as one of jazz’s most original and influential musical forces.

2013 finds Turner entering an exciting new creative phase, with his varied talents showcased on a variety of notable new recording projects. Later this year, he’ll release his sixth album as a leader – his first under his own name in a dozen years. He’s also featured on new or upcoming releases by pianist Stefano Bollani, guitarist Gilad Hekselman, pianist Baptiste Trotignon and the Billy Hart Quartet, of which Turner’s been a member for nearly a decade and with whom he recorded two previous albums. He’s also continuing his work as a member of Fly, a collaborative trio with bassist Larry Grenadier and drummer Jeff Ballard.

Born in 1965 in Ohio and raised in Southern California, Turner grew up surrounded by music. “There always was a lot of R&B and jazz and soul and gospel going on in the house all the time,” he recalls. “This was in the early ’70s, when the whole integration and civil rights thing had begun to go mainstream, and my mother and stepfather were in the first wave of young black professionals and intellectuals who moved to upper-middle-class white neighborhoods. They and their friends were always going out to see live jazz. I was intrigued by that, and I was intrigued by the whole history of jazz music and African- American culture, as well as the music itself. And my father, who died when I was one and a half, had played saxophone, so maybe I was looking for a connection with him too.”

Of his latest album, “Lathe of Heavn” (ECM Records 2014) a quartet effort with Avishai Cohen on trumpet, Joe Martin on bass and Marcus Gilmore on drums, Turner notes, “I spent a lot of time on the compositions, which I usually do. The blowing is important, but I don’t think about that when I’m writing. I just write the tune, and then we see if we can improvise on it or not. Some of the new tunes are long and kind of involved, and some of them are kind of my version of being pyrotechnical. I just wanted to explore, and I wanted to be able to go in there with a band that would be flexible and have the craftsmanship and the foundation to play something difficult and still make it sound music”.

Obed Calvaire, a native of Miami and of Haitian descent is a graduate with both a master and bachelor degree of music from one of America’s premiere private music conservatories in the nation, Manhattan School of Music. He received his bachelor’s degree in 2003, completing the undergraduate degree requirements in three years and receiving his master’s in 2005. Mr. Calvaire has performed and recorded with artists such as Wynton Marsalis, Seal, Eddie Palmeri, Vanessa Williams, Mark Murphy,David Foster, Mary J. Blidge, Stefon Harris, Kurt Rosenwinkel, Music Soulchild, Nellie McKay, Yellow Jackets, Joshua Redman, Steve Turre, and Lizz Wright to name a few. He has also performed with large ensembles such as the Village Vanguard Orchestra, Metropole Orchestra, the Mingus Big Band, RoyHargrove big band, and the Bob Mintzer Big Band. Currently, Obed Calvaire can be found playing with Peter Cincotti, Richard Bona, Monty Alexander, Sean Jones, Yosvany Terry, The Clayton Brothers Quintet, Mike Stern among others.

Trumpeter Avishai Cohen — voted a Rising Star three years running in the DownBeat Critics Poll — has earned renown as a musician with an individual sound and a questing spirit, an ever-creative player-composer open to multiple strains of jazz and active internationally as a leader, co-leader and sideman. The New York Times described him as “an assertive, accomplished trumpeter with a taste for modernism,” while The Chicago Reader has deemed him as “arguably the most exciting Israeli Jazz musician in the world.” Triveni, the trumpeter’s current primary touring project, has been praised far and wide for its sonic telepathy, with NPR saying: “The essence of Triveni’s airy sound is how, aware of one another, each player creates interesting, flowing lines and lets the space participate. Think of artists sketching and drawing together.” Anzic Records released Dark Nights, the trio’s third album — and Avishai’s seventh recording as a leader — in autumn 2014 to critical acclaim. The trumpeter has also recorded and toured the world as part of the prestigious SFJAZZ Collective, the Mark Turner Quartet, and with the 3 Cohens Sextet — the hit family band with his sister, clarinetist-saxophonist Anat, and brother, saxophonist Yuval. With the 3 Cohens, Avishai has twice headlined the hallowed Village Vanguard, as well as appeared on the cover of the January 2012 issue of DownBeat.