THE MUSEUM OF MIŠA BLAM 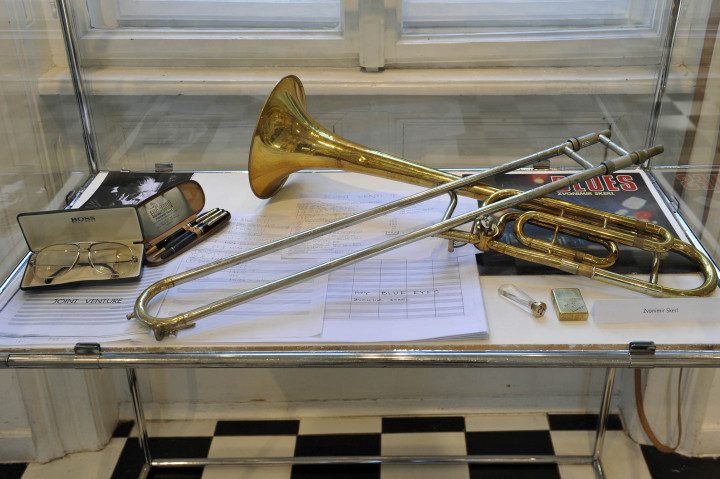 Jazz is undoubtedly one of the distinguishing features of the 20th century. As the youngest music style, it has already established its rules, which are mainly based on the rules of its older ‘sister’- serous, classical music. It was born by the end of the 19th century in the United States of America, but it did not remain there for long. Like a tsunami, it reached the European continent and nested here. It first appeared in Serbia in the mid-1920s. My research led me back to 1927, when the first ‘Student Micky Jazz’ orchestra was founded in Belgrade. Soon afterwards, jazz orchestras were established throughout Serbia: Valjevo, Šabac, Niš… Dance schools were opened. Every prestigious hotel or club of that time was unimaginable without a jazz orchestra. Jazz music was listened to in the famous spa resorts. The situation lasted until World War II. One would think that the world-scale catastrophe would stop jazz. Quite to the contrary! Jazz was played even during the German occupation. The occupied Radio Belgrade established a big band. At about the same time, a concentration camp jazz orchestra was formed in the officers’ camp in Nurnberg and named ‘Vegetarians’, later to be renamed ‘Barbwire’. With the liberation of the country, jazz continued its active existence. Big Bands were established in every republic capital of ex-Yugoslavia. Belgrade got its Big Band in 1948. As soon as 1953, the first Association of Jazz Musicians of Serbia was founded, and 1956 saw the appearance of the first foreign jazz artists: Yuta Hip, Dizzy Gillespie, Luis Armstrong, Oskar Peterson, Ella Fitzgerald… In 1970 and 1971 Newport Jazz Festival was founded in Belgrade, which later evolved into the Belgrade Jazz Festival. Jazz festivals were founded in other cities and towns: Novi Sad, Niš, Kanjiža, Valjevo, Šabac, Kraljevo, Subotica, Pančevo, which are still active. Serbia became one of few European countries to introduce jazz departments into the educational system (in high school and academic level education), and these jazz departments are still active at high music schools in Belgrade and Leskovac, and on the higher academic level at the Faculty of Music Arts in Belgrade. This exhibition intends to present a smaller segment of the abundant archive material related to jazz in Serbia, with an ambition of establishing a museum, which would host jazz workshops, and be a home to a book, score and record library. Among the planned activities are concerts and publishing as well. Thus, Serbia would become the only country in Europe to have such an institution.

Thanks God, Europe has hundreds of museums – small, large, grandiose, presenting their collections dedicated to various themes. If we were to ask ourselves which music culture has not yet received its museum representation in Europe, the answer would be very simple: jazz! There are several museums in the USA dedicated to this topic. Research and collection of documentation connected to this noble musical and social culture has revealed that Serbia, surprisingly enough, was very up-to-date at the moment of the arrival of the jazz tsunami from America. Jazz music was present in our country as early as the second part of the 1920s. Several decades later, we managed to collect data and put together the mosaic of the birth, currents and development of jazz in Serbia. These discoveries were of capital importance. Serbia did not lag one inch behind the then developed countries. Quite on the contrary! The collected documentation shows that this tormented country kept the pace with all the ‘developed’ countries. The event ‘Night of Museums’ provided an opportunity to show a part of the archive material collected by Mihailo Blam. Forty years of enthusiastic work and research will undoubtedly contribute a small tile to be built into the mosaic of the culture of Serbia and the Serbs. The lavish collection of documents, photographs, bibliographies, discographies and posters will show for the first time what has been happening in Serbia in the last eighty years. The intention behind this exhibition is to establish a jazz museum in Serbia, where this abundant collection will be protected and kept. One should never forget that having a good future is not easy if we do not protect the past. And since we have a tradition in this cultural segment, why wouldn’t we proudly show it?